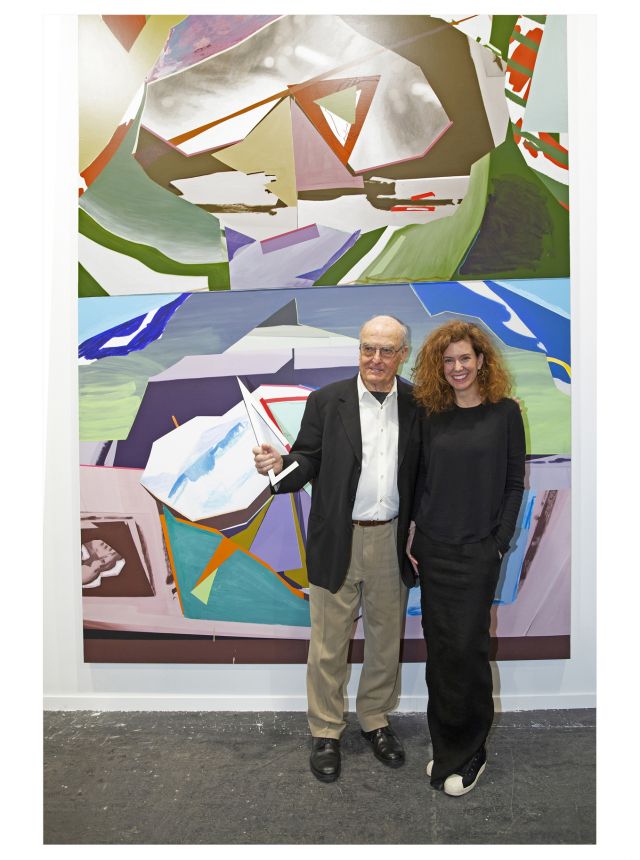 Luis Gordillo was born in Seville in 1934, and is the second of eight children. He studied law and music, and later decide to become a painter and attended two years at the School of Fine Arts in Seville. From 1958 to 1960 he lives in Paris where he studied thoroughly museums, film, and, above all, he lived a climate of freedom of life and reading, which would be difficult in Spain. He paints in the records of informality, especially works in black colors on white backgrounds, along the lines of Michaux, Tapies and Millares, Wols, etc.

When Luis Gordillo leaves Paris, his aesthetic stance is in crisis, being this a critical point in the biography of Luis Gordillo. Even his artistic vocation is in crisis. For the first time notes the plight of the painting, feeling that he had not abandoned throughout his life but who nevertheless has become one of the basic springs. When he returns to painting in 1963, he does so within the Pop aesthetic, in which he can be considered a pioneer in Spain and within which he creates the famous series Cabezas, especially in 1965. A new geometric influence this time (Peatones, Automovilistas, etc.) concludes which Gordillo considers an initial synthesis (informality, Pop, geometry), basis of his style.

In 1970, after a long crisis recorded as part of Luis Gordillo's biography, during which he only draws pictures very loosely, he begins to paint pictures full of color, and with a new element, the irony. He also makes an extensive technological research, of image transformation from the media, and full photographic creation. It's the time of two very important exhibitions, the Maeght Gallery in Barcelona (1976) and the Museum of Fine Arts in Bilbao (1981), which largely explain the relationship between painting and technology.

In the eighties, he changed his painting, in another key point of his biography. Luis Gordillo's painting becomes more abstract, less colorful and the author comes to think of a bridge that connects it to its informalist abstraction. The concept of "meandering situation" is basic to the development of his work in the eighties and until today, and is based on finding a route to a spot almost linear and monochrome that is spreading across the table and in whose progress Gordillo's idea about the diversity of automatism is essential. Throughout his career, Gordillo has been in a sharp dilemma between a very direct and expressive work, and on the other hand, the realization of a work very controlled, very clean and perfectionist in which mechanical techniques from the seventies have influenced, such as offset printing, photography, and most recently, the computer.

He has also been honored in 2008 with the Orden de Caballero de las Artes y las Letras de Francia by the French Ministry of Culture and Communication.