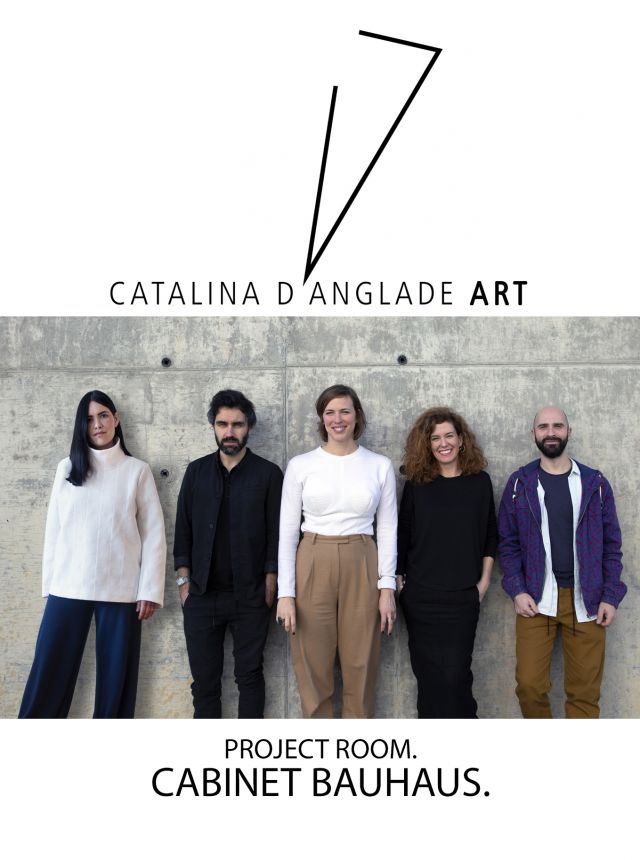 Four leading artists sign the first object collection of Project-Room. An initiative runed by Catalina D’Anglade Art that revives the spirit of the legendary school.

The artists are Guillermo Mora, Nuria Fuster, Karlos Gil and Leonor Serrano Rivas, four names based in the national and international emerging art scene. They are definitely highlights members - and award winners - of his generation. The four tooked the chance when the designer and collector Catalina D’Anglade invited them to create a collection of household objects or appliances that merge art and design. This first edition will be a tribute to the spirit of the German school that also gives its name to the collection: "Cabinet Bauhaus".

Guillermo Mora’s proposal, called “Punto y línea sobre tabla” spread out his painting on a linen tablecloth, in which he represents the three basic Bauhaus shapes – triangle, circle and square – as well as the three pure colours. A game that multiplies on the table napkins, where  he transforms the rigidity of what represents to the usual informality environment around a table.

Nuria Fuster’s project, titled “Bubblehaus”, is a table lamp that establishes a connection between the industrial things and the cosmos. Its spherical shape gives a set of light eclipses and rotating orbits that connect us whit the essential and basic: the cosmos. In a functional way, it allows us to direct the light where we want. Both iron griddle circles are suspended in balance, generating a kinetic game on space.

The central axis is rotary and sensitive to any movement that could happen around, and that changes its position. It’s an object that expands and actively participate generating different states and works on a time dimension.

“Ghost Whisper” is the title chosen by Karlos Gil to his project for Cabinet Bauhaus. His proposal, inspired by Triadic Ballet from the Bauhaus painter and designer Oskar Schlemmer, present two pieces with a base structure which follow, analogously, the mechanism of Schlemmer’s cloakroom. The artist starting point are six fragment of vases from different historical era. Each one of them has been designed individually and can be joint with two other parts, to get a different composition, playing with enamel vases.

Leonor Serrano Rivas’s work for Cabinet Bauhaus called “Bauhaus jar” has two parts. On one side, a handmade piece of glass done through blown glass technique which, in its multiple versions, each one has the three colours from Bauhaus movement: yellow, blue and red. On the other side, we found an iron structure, a serialized and standardized piece that hugs the different glass bases.